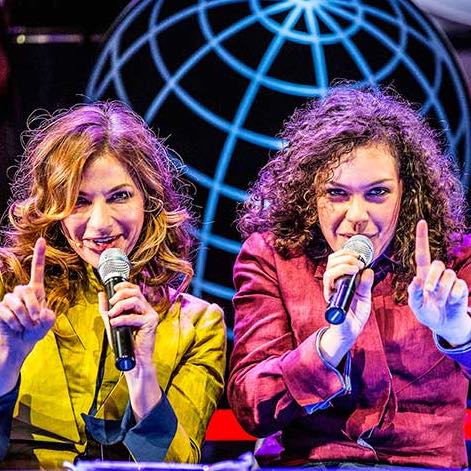 The News, a reality opera

‘THE NEWS is a reality opera based on speech grooves, in which live music is synchronised with non-fiction footage from the international media. The drama is constructed using broadcasts from newscasters, politicians, scientists, televangelists, athletes, movie stars and celebrities discussing a vast array of socio-political issues, from global warming to the credit crunch, as well as matters of war and peace to trivialities, thus exposing our western society’s obsession with public image, fame, catastrophe and morality.  With media coverage constantly changing, ruminating and updating worldwide, THE NEWS is a fresh approach to music composition, video production and social commentary through live performances. This singular and timely work, which marries conventional media material to extraordinary artistry, engages the public in a uniquely stimulating experience; catalyst for introspection and dialogue’.
Stephen Burns, artistic director of Fulcrum PointNew Music Project Chicago

The various editions of  THE NEWS took place between 2010 and 2016. It was work in progress, each edition had to be different, according to topicality and the country we were performing and could last from 15 minutes to an evening length production.
Orchestration: news anchors: soprano + alto/jazz singers, 3 sax, trumpet, trombone, e guitar, percussion, keyboard, bass, audio tracks, videos. Videos by Jan Boiten, Kristien Kerstens, JacobTV. Music by JacobTV.

THE NEWS is published by JacobTV’s BOOMBOX. For information contact us at jacobtv@me.com
THE NEWS: REVIEWS