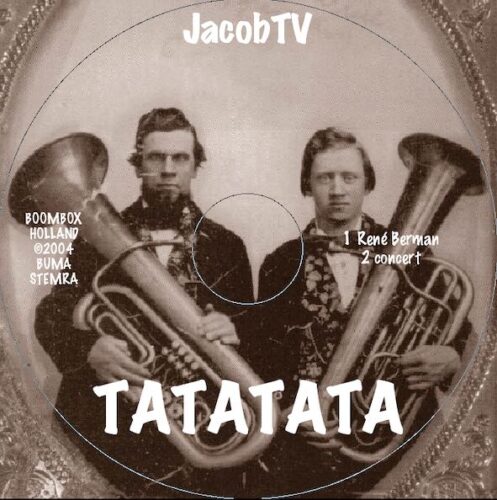 Tatatata was written in 1998 for cellist René Berman with financial support from the Dutch FPA.

The use of ‘ready made objects’, or ‘objets trouvés’ in modern art started in the early 20th century with the French artist Marcel Duchamp. The French poet Guillaume Apollinaire also used objets trouvés, using fragments of speech from people on the sidewalks in Paris. Since the invention of the sampler, ready mades are also easily possible in music. Tatatata is one of my first speech melody based compositions, created with the Akai CD3000  sampler. Tatatata is based on a sound recording of just 3 seconds of an old man remembering Apollinaire as a soldier during the Great War of 1914-1918. The poet had returned  from the battlefield and was recovering from a head wound. He took the young boy on his knee and sang a military tune, which the old man remembers as: ‘tatatata’. It was a challenge to write ‘theme and variations’ music based on just this one single sound byte, but the sample possessed unsuspected musical qualities by time stretching the audio. The apotheosis is the voice of Apollinaire, from a creaking old phonograph, reciting one of his most famous lines: ‘Vienne la nuit, sonne l’heure.’ In 2018, JacobTV made a concert video based footage from WWI.
The cello version can be done on double bass, with some adaptations.
The duo version for tenor sax and baritone sax  was initiated by Thomas van Gelder, and can be performed on low brass instruments as well.