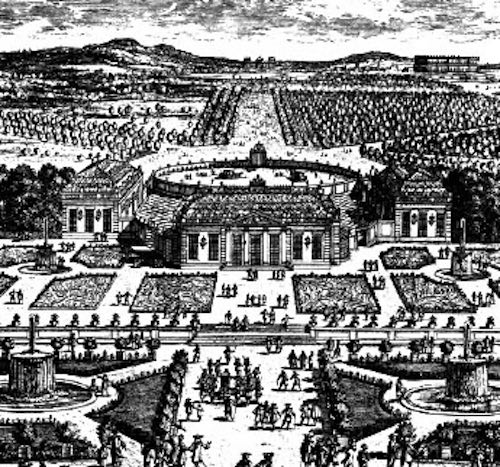 STRING QUARTET No.1 ‘Versailles’ is a neo-baroque divertimento, inspired by 17th-century French landscape gardening. The gardens of the Palais de Versailles were a symbol of centralised power. Its symmetrical garden-arrangement formed the basis for a wealth of ornamentation, which was achieved by subjecting all plants to rigorous trimming. The 17th-century landscape architect saw his creations as an earthly paradise in which nature was subordinated to art. The opposite powers of unbridled nature, on the one hand, and all-controlling man with his trimming knife and hedge-clippers, on the other hand, form a tragi-comic dualism. In a larger perspective, this behaviour has become a worldwide question of surviving or perishing, as nature is worldwide under threat.
A composer tries to arrange his music like a landscape architect does his plants, statues and fountains. The components of symmetry and repetition have a determining factor on the form of the baroque garden. In this quartet these components were applied.

I Parterre de pieces coupées pour des fleurs 4:37
An important element in the baroque garden is the parterre, a rectangular area containing symmetrical and fancifully modelled flowerbeds, surrounded by small hedges and accentuated by little ornamental trees. The movement is based on an untempered ‘hedge- clipper’s motif’ in contrary motion. During the absence of the gardener the plants run wild, but in the end the inevitable hedge-clipper brings everything back under control again.

II Labyrinth 6:46
The labyrinth of Versailles was a square plot of land with dense covering of countless shrubs. The many pathways that traversed it, merged so imperceptibly one into one and another, that one could very easily got lost. Here, two lovers (represented by the first violin and the cello) wander about endlessly along identical footpaths.

III ‘Disposition’ générale d’un grand jardin 4:35
The ‘Disposition’ is based on symmetry, contrary motion and repetition, important elements of the layout of the ideal baroque garden , as discussed by Joseph Dezallier d’argenville in his manual la Théorie et la Pratique du Jardinage. (Paris, 1709)

IV trianon de Porcelaine 3:07
In 1670, louis XIV built a country seat to please his mistress, the marquise de Montespan. He bought the poor village of Trianon and had it raised to the ground. The name, however, was retained for its beautiful sound. The new buildings were plastered with blue and white porcelain, to imitate the Chinese pagoda at Nanjing. In nearly all seasons the garden was a variegated sea of flowers, filling the air with the sweet scent of blossom. in 1687, when the marquise fell into disfavour with the King who was seeking a change, Trianon de Porcelaine was demolished to make way for the present Grand Trianon. The music in this section is a small contemplation of transience, in memory of a forgotten little village and a forgotten pleasure garden.

Parts of String Quartet No.1 were used for choreographies, like Hans van Manen’s Short Cut and Juanjo Arqués’ Roulette (videos below)