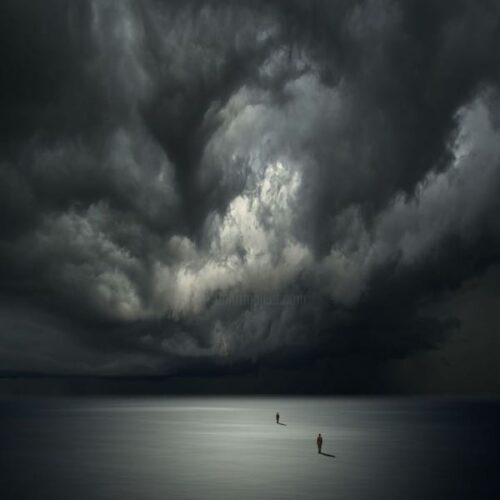 PIANOCONCERTO No.2 ‘SKY FALLING’ was composed in 2009 and  is dedicated to Ronald Brautigam. The concerto was commissioned by the Dutch broadcasting company AVROTROS with financial support from the Performing Arts Funds of the Netherlands. Première & radio broadcast took place on March 5 & 7 2010 at Vredenburg Utrecht and Concertgebouw Amsterdam, by Ronald Brautigam with the Dutch Radio Kamer Philharmonie conducted by Thierry Fischer.

During the worldwide financial collapse of  2008, I heard a reporter on Wall Street say that ‘the sky isn’t falling’. Nowadays the most obvious certainties of yesteryear are at stake. The image of a falling sky was an inspiring metaphor during the composition process.
Listening to a symphony orchestra to me, is often a nostalgic experience because the repertoire usually dates from long ago and the orchestra itself hasn’t changed much in 200 years. So when I write for orchestra, I try not to force it into something it cannot become. In my opinion, a symphony orchestra is a coach, not a car. A beautiful coach though.

A few years ago Ronald Brautigam and I were on the same program a Dutch orchestra, when I heard him play Mozart a couple of times: It was as if the sky opened, so beautiful sounded both Mozart’s music and Ronald’s touché. My second piano concerto may sound neo-classical, but it was also influenced by the blues, like the Hoochie Coochie Man groove in the first tutti. And then there are the perpetuum structures of bouncing second intervals. ‘Sky Falling’ has become less dramatic than I initially had in mind, but as always, it depends on what the musicians make of it. The live recording was released on JacobTV – The Complete Piano Solo Music, Brilliant Classics.