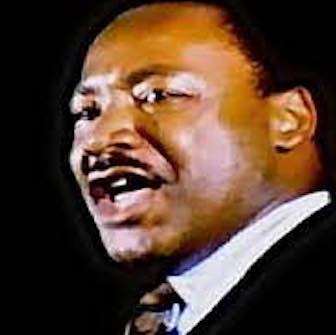 King was a charismatic preacher, and one of the greatest orators of American history, devoting his life to the advancement of civil rights. Growing up in the 60’s I remember King very well, the Dutch media reported about him regularly. Mountain Top is a timeless speech in which King calls for unity and nonviolent protest, while challenging the United States to live up to its ideals . It is moving how he predicted  his own death:

The melodic intonation of King’s passionate speech was a great source of inspiration, apart from the words themselves. I sampled words and sentences, analysed pitch and duration, and wrote it down in musical notation, using this as the leitmotif for my composition. In fact, melody, harmony and rhythm of Mountain Top is based on the original speech. Like in a cantata, King is the lead singer. In order to synchronise Kings words with the live music, audio and video is ‘performed’ by a musician playing an electronic keyboard in the ensemble.

Documentary ‘The making of Mountain Top ‘ on national Dutch tv: