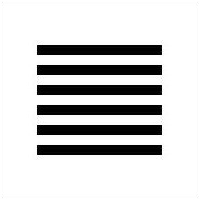 Hexagram of the Heavens

String sextet and string trio HEXAGRAM OF THE HEAVENS was commissioned by AVROTROS broadcasting company on Dutch Radio 4. It was composed early 2021 and dedicated to violinist Noa Wildschut and
friends, consisting of Charlotte Spruit, violin, Take Konoe and Dana Zemtsov, viola, Julia Hagen en Alexander Warenberg, cello. The world première took place on May 28 2021 at Tivoli-Vredenburg, Utrecht during a live broadcast and streaming. The title is from a song by Joni Mitchell, Amelia from the album Hejira (1977)

Hexagram of the Heavens is the first of the 64 hexagrams from the Chinese Book of Changes, the iChing. It consists of 6 horizontal lines representing the upper and lower heaven. In between is our earthly existence. According to translator Richard Wilhelm,  the unbroken lines stand for the primal power, which is light-giving, active, strong and spiritual. The hexagram is consistently strong in character, its essence is power or energy, unrestricted by any fixed conditions in space and conceived of as motion. Time is regarded as the basis of this motion.  This hexagram contains all the meanings of the word heaven. According to Chinese mythology 6 dragons pull a carriage across the sky. Change is essential, so that everything becomes what it should be. Harmony is based on unity and stillness. This hexagram also refers to man’s tendency to bend the world to his will in a compulsive way, instead of being in harmony with it.

The sextet version of Hexagram of the Heavens consists of two identical string trio’s who, during the composition, gradually merge and become one. For me, composing is a process that takes place somewhere in my subconsciousness, until I can reach it with my head, distilling a musical story from it. The music starts from stillness, in which individual instruments hesitantly approach each other, building 2 trios that gradually accelerate and fuse. A euphoric apotheosis results in a coda, voicing a harmonic synthesis of both heavens. During the composing process a string trio arose, being a compressed version of the sextet.