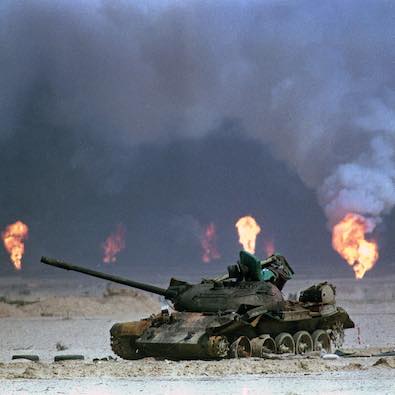 Gulf War (1997) is a speech melody based soundscape composed with original testimonies of soldiers, officers and political leaders about violence during the 1991 Gulf War. Pitch, timbre and rhythm of speech are the leitmotif for the music.

GULF WAR
Le nedri matha jubayu thu’Allah helena gaddem.
(Only God knows what tomorrow will bring )
An they would give out a yell,an Arab battle cry like:ULLLLLLL
Rapers murderers and thugs. Rape…
What shall we do with these children?
And actually had these children in the sights of the pistol.
Shall we shoot them?
It was an instantaneous decision:No we’re not gonna shoot children .
What are we gonna do,what shall we do with these children?
And I know in my heart had I told them to shoot they would have shot them children
My garsh we’re all gonna die here…  To die for his country
He had very brown eyes that were open and and staring
The whites of his eyes
We’d seen dead bodies before, I was ready for the smell of war.
Make sure, you understand this is clusterbombs
Did you understand our ordonance ? – it’s clusterbombs!
This is:Danger Close!  Capture that, orders is: clusterbombs !
D..north of our location  – That’s affirmed we’ve got bombs away now.
He started to cry … I’m embarrassed to say but I started to cry as well.
We had 12 500 pound bombs.
This was not a bunch of innocent people.
They needed to put some hate in their heart.
These guys are rapers,killers,murderers .
Let’s get this mission accomplished.
and let’s do it asap: I wanna hit them with a fist at full speed
An attack that starts and stops and starts and stops.
I wanna hit them with a fist at full speed.
With a three division fist . It was all black.
And I saw this blood coming through my clothing.
Identified tanks, I yelled: Fire. FIRE!
As I was yelling ‘fire’ on the intercom the gun errupted.
Very lucrative target
Here we have the golden opportunity to accomplish far beyond our dreams!
They needed to put some hate in their hearts.
These guys are rapers,killers,murderers.
Why did we bomb them?
Because there was a great deal of military equipment on that highway.
And they just kind of pitched over in the desert.
You know we had to take the lives of these people.
My heart jumped into my throat as we pulled the trigger
and you know unloaded into the point element.
Missiles were fired,some randomly,some aimed.
There was shooting from the vehicles.
There was shooting from man sights on either side of the road.
It might have been disorganized but this was an armed retreat.
The thick black oilfield smoke.  Aircraft flying around;
Very surrealistic, you almost had to slap yourself into reality.
Scramble’round in the desert tryin’ to figure out what was going on.
Chemical Killing Sack . We are human, like you…..
Do the job properly.
Hey guard keep your head down,we’ve got some more coming in!
Aggression,aggression is defeated,  the war is over!