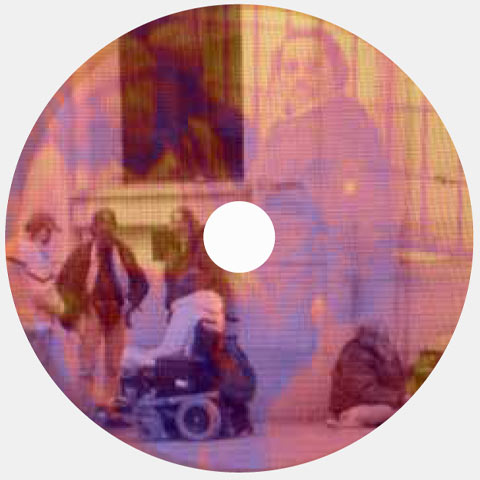 Originally composed for tenor sax in  November 1999 for Arno Bornkamp with financial support from the Dutch PFA, its world premiere took place at a concert called ‘Who’s afraid of…” at Vredenburg, Utrecht season 1999-2000. After a performance by Arno at the World Sax Congress in Montreal, July 2000 however, Grab it! became a repertoire piece for the tenor sax and was by request arranged for several other instruments and combinations.
Growing up in the 60s with blues, jazz and rock, American music had a strong impact on JacobTV.  Language is one of the origins of music, which is for instance obvious in blues. In Grab it!, the ‘no-man’s-land’ between speech and music is explored. Speech becomes music, when people get emotional. Like crying and singing can become one…

Grab It! is based on speech samples from life-sentenced prisoners. Their verbal vitality and aggression matches the harsh sound of the tenor sax. Grab it! is a competing duet, a ‘battle’ if you like, for tenor sax and speech grooves in unison. The sax ‘competes’ with a non-stop range of syllables, words and one liners, demanding endurance from the performer.  In jail suicide is not uncommon: ‘He tied one end around the pipe, and he hung himself. So he went out the back door rapped up in a green sheet with a tag on his toe….You lose everything!‘ But Grab it! is not just sad, it can also be understood as a ‘memento vivere’. Death row as a metaphor for life: Life is worth living. ‘Grab it!’

A set of 2 concert videos contain videos by both M.Zegers and  JacobTV and come as mp4 files.
Bass & drums accompaniment parts can be ordered separately and added to any solo version.

For these small & large ensemble versions ( visit Grab it! XXL)
GRAB IT! EK* rock band 2006 version
GRAB IT! XL * for a ‘one of each’ ensemble
GRAB IT! XXL for big band + string orchestra
GRAB IT! X12 * for saxophone ensemble & drums

Grab it! on tuba, by Néstor Martínez Jara: