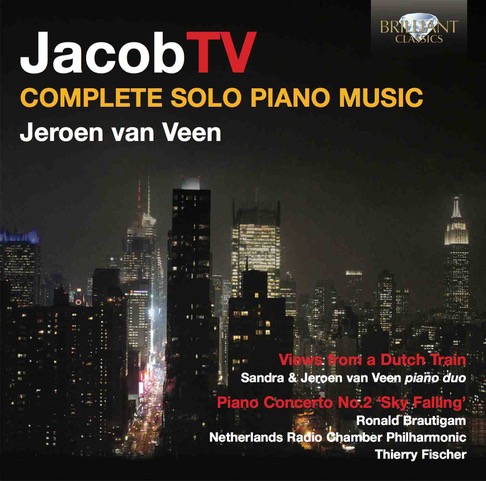 Called ‘the Andy Warhol of new music’, JacobTV (Jacob ter Veldhuis) has a dynamic and fast-moving career, including a three-day JacobTV festival at the Whitney Museum of America (2007) and a reality opera, The News, which is constantly being updated. He blends minimalism, jazz, classical and electronic instruments to create an elusive style all his own, and he does this so successfully that, with around 1000 yearly performances worldwide, he is one of the most performed European composers of his time. This two-disc collection is the brainchild of JacobTV himself and Jeroen van Veen, who has been performing Jacob’s music since 2001.

Jacob’s music spans a huge variety of subjects. Disc 1 ranges emotionally from dry commentary on politics, such as Postnuclear Winter Scenario No.1, written to describe Jacob’s feelings of helplessness at the outbreak of the Gulf War, to quirkier pairings of the piano with the boom box (Sound, dedicated to the memory of John Cage) and the hammer (Where the Heart Is, Op.74b for piano and huge hammer). Disc 2 focuses on his two Pianoboeks, each containing movements exploring different keys and moods, and his Intervallen, which is meant as an exercise for amateur pianists.

Here he brings together the Netherlands Radio Chamber Philharmonic Orchestra (with Thierry Fischer as conductor) with Brilliant Classics regulars Jeroen and Sandra van Veen and internationally educated pianist Ronald Brautigam. This album is supported by OxArt as a project for communicating language through the arts. Recorded in 2010, 2012 and 2013, Concertgebouw Amsterdam.

This set contains the piano music by one of the most innovating, open minded and controversial Dutch composers of today: JacobTV. His music is a fascinating fusion of minimal, jazz, classical and electronic music, mixed however in a highly personal melange. His works are performed regularly all over the world and present the new musical forms in which the aural and visual blend into a kaleidoscopic art form, crossing borders between the traditional and experimental.
Performed by Champion of Minimalism Jeroen van Veen and internationally renowned Ronald Brautigam, who plays the Piano Concerto with the Netherlands Radio Chamber Philharmonic, conducted by Thierry Fischer.
Booklet features detailed notes on the music by the composer as well as composer and artist biographies.