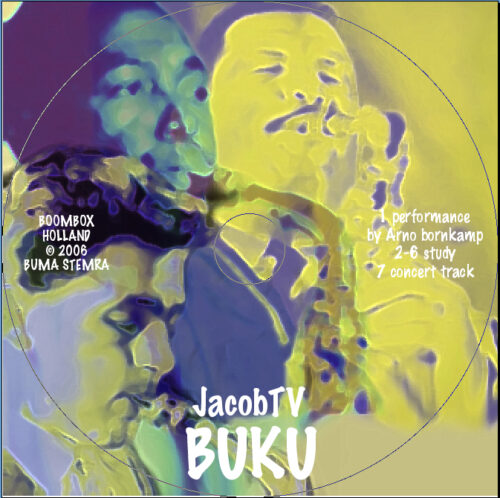 Buku was composed in the Spring of 2006 for Arno Bornkamp, with financial support from the Dutch FPA. Its premiere too place July 7 2006 at the World Saxophone Congress in Slovenia.  Buku was recorded by Arno and was released on: JacobTV – Shining City, Basta 3091742 as well as: Arno B plays JacobTV, Basta 3091962. JacobTV added a concert video to the music.
During a radio interview, Charlie Parker talked about Dizzy Gillespie. Charlie: “I don’t remember precisely, I just know that he was playing in what you might call in the vernacular streets of Buku”. Reporter:”Buku?” Charlie: “Yeah, Buku.” The reporter does not seems to know what Parker is referring to. Is Buku some remote place deep down in Africa?  Some say that he used the French word ‘beaucoup’, meaning ‘a lot’. So Dizzy was playing a lot…
Buku is based on catchy musical sound bytes: a hit, a roll or a lick from original live  jazz performances, those moments of intensity, energy and beauty.  Buku is about the ‘soul’ of the alto sax and a tribute to 3 alto giants: Charlie Parker, Cannonball Adderley and Art Pepper. Meet them in Buku!